A downloadable game for Windows and macOS

"Noooo! I don't want to become the nasty little man!!! Noooo!"
- Another Playtester

"This game truly knows what it means to be haunted."
- Playtester

"Don't tell me that thing actually exists. The video was creepy as heck" - Zakurako

"why it creeped me out" - Maйя

"This actually got me to start looking away from my computer screen about two thirds through." - Tales

I swear I played this, but then I looked at the date, march 5th 2020, the start of the end of the world lol

i just thought about litle nasty for the first time in a year and i was like, "oh no oh f*vk" and "oh sh*t"

I hate dolls and mannequins, the game is short and interesting, I look forward to even more games similar to this theme :)
My walkthrough in Russian, start with 07:29

Absolute fire beat at the beginning of this game!

I literally haven't played this game yet and I already had nightmares about him, thanks

Reply
the strangler1 year ago(+1)

Reply
Recanto Sombrio1 year ago
GREAT GAME ! Awesome soundtrack, awesome design, so i decided to speedrun and got world record on it ! HELL YEAH ! Thanks for the great game !
Reply
peteymc2 years ago

Overall this game was brilliant

I played your game! And that little man sure was nasty. Hoping that you took that "real life" nasty man home!

It is scary and funny game!

Reply
GripCity Gaming2 years ago
I had so much fun playing Nasty Little Man. The music is stellar and the cover screen looks so great with the PS1 cover. The death screen was hilarious with them all laughing together. All in all, I really enjoyed this one. It's the first game in the episode. Game starts at :41 (timestamps in the description)
Reply
isoladellerosetv2 years ago

Cool game I likes that playstation stuff :P This my Italian gameplay

I liked this game a lot, but I think one way that there should be a sprint button.

The game is scary, and that is obvioudly the intent, but I think that adding a sprint button can make this be reflected in the gameplay. It doesn't make sense to  just walk slowly when being followed by a bunch of nasty little men, I think most people would run in that situation. I can understand the reasoning behind not putting in a sprint button as it would make the game easier, but I think that if you also made the nasty little men go faster when this button is pressed, it wouldn't affect the gameplay.

Adding a sprint button won't change the game itself, but I think that it will make the game feel scarier to play.

The sound track is litterly the best part of the game. Please upload it to youtube.

Interesting idea for a game.

Fun to see how long everyone else can last. Manuevering around the little guys can make the game slightly easier at times, but it feels scary trying to move around a huge herd of them!

is there any way of inverting the controls? - sick game btw

too short and easy imo

This is awesome! A great example of something short and simple but creepy and fun.

From the ending, is this based on a real thing?

Your dodging skills were amazing

The beat at the end of the game got me so hype I made like a 10 sec music video for it at the end haha, I was feelin it man. The game was also pretty fun. Pretty straight forward.

the games is pretty scary but is fun to play

played your game in an indie romp, hope you enjoy! Why does that doll have to be real. why did you include that video. I haven't been able to sleep since

These little guys are a massive pain in the butt! Fun little game though!

renaming the project "nasty little shits" thanks for the tip

Oh you're more than welcome ;)

This My Favorite Throwback Game So Far... I got the Ape Escape Vibes...

Thank you!! Nice freestyle at the end

That was a weird and stressful game. Nice job

Such a silly game lol. It was fun though! Definitely a bit of a challenge! I had a lot of fun with this! Here's my playthrough:

It was a quick and easy game BUT it did give me a challenge! I love it! Keep it up! Would love to see you go further with this game! This game starts @1:15

Was a really trippy game loved it are you planning on adding more? 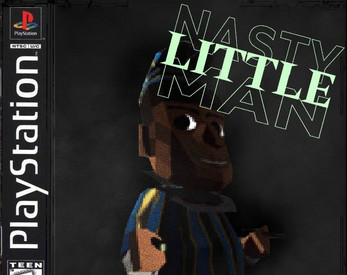